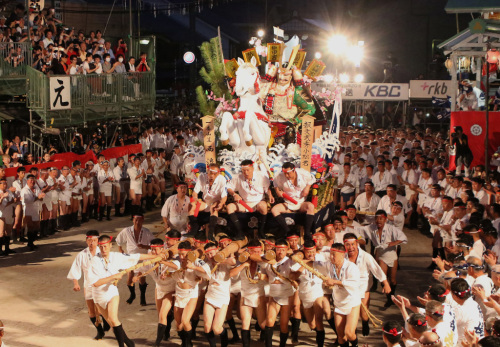 “Hakata Gion Yamakasa” is a dedicatory Shinto ritual of Kushida Shrine, which has been held for over 770 years and held between July 1st and 15th every year.

The origin of Hakata Gion Yamakasa is that in 1241 when Hakata was visited the plague outbreak Shoichi Kokushi, the founder of Jotenji temple, sprinkled with prayer water ridden in segaki shelf for the plague removal and cleansed away the town. (*There are several theories on the origin.)

Formerly, men used to carry about 15 meters tall Yamakasa floats and parade slowly down the street in the town, but when the coming of Meiji Era, because they would get stuck on electric cables and lights, it was decided that they were more suitable for display purposes only and called “Kazariyama (tall decorated floats)”, and shorter floats to be carried were made, called “Kakiymama”.

Every year, the festival period from July 1st to 15th, Kazariyama decorated gorgeously and luxuriously are set up on the street corners in the city for display and you can take a look at them while strolling through the city, at the same time, it is common to see men wearing Happi coat (Toban Happi and Mizu Happi) for the festival. Until the early morning of festival culminates in excitement on the 15th (Sun), in Hakata City will be all about Yamakasa.

Out of all the Yamakasa events, popular ones are “Oiyamanarashi” on the 12th, “Shudan Yamamise” on the 13th, and “Oiyama” on the 15th, in which you are actually able to see men run with Yamakasa on their shoulders. Besides, there will be lots of opportunities to see Yamakasa floats run through the town on “Nagarekaki” on the 10th and 14th, “Asayama” on the 11th, “Tanagaregaki” on the 11th.

Since Yamakasa was officially registered on UNESCO Intangible Cultural Heritage List on December 1st, 2016 (Japan time), people have serious rekindling of interest more than ever in “Hakata Gion Yamakasa”. Please get a feel of the air of excitement!

Main schedules are listed below.

Kazariyama decorated gorgeously and luxuriously are set up on the street corners in the city for display.

It is a purification of Shinto Ritual in which about 1,000 men from all Nagare districts set out together to reach Hakozakihama beach.

●July 10th (Wed) Nagare-gaki (Starting Time: 4PM / It varies depending on the Nagare.)

Finally, Kakiyama gets going. Each of Nagare district run around their district area with float on their shoulder for warm-up.

●July 11th (Thu)
Asayama (Starting Time: 5AM / It varies depending on the Nagare.)

It is also called “Shugiyama” and patriarchs of merit and children are allowed to climb on to Yamakasa floats.

Tanagaregaki (Starting Time: 3PM / It varies depending on the Nagare.)

Men carries the float to other Nagare districts for making courtesy visits and interacting with one another.

As a rehearsal of Oiyama on July 15th, the float will be carried on men’s shoulder and run for 4 kilometers just like the real race.

The floats run 1.2 kilometers from the intersection of Gofuku-machi to the City Hall in Chuo-ku, Tenjin. Not only the mayor but also local noted men climb on to the float. You can enjoy seeing the floats on both outward and return.

●July 14th (Sun) Nagaregaki (Starting Time: 4PM / It varies depending on the Nagare.)

This is the last Nagaregaki this year. It’s the final adjustment and conditioning for the next day, Oiyama.

Early in the morning, at 4:59, on this final day of the festival, the first float sets off at the signal of beating drums, runs into the Kushida Shrine grounds, after that, from the second to the seventh float run into the shrine at intervals of five minutes then make a run to the town from the shrine.

It is a Shinto ritual that the gallant Yamakasa dedication appease the excitement of the god. It is held at the Noh stage in Kushida Shrine at 6:00 AM just after Oiyama is over.